Ways Women Orgasm Dedicated to women's enjoyment of sexual pleasure!
HomeOrgasm TechniquesSexual fantasiesHow to give a woman an orgasm during sex

How to give a woman an orgasm during sex 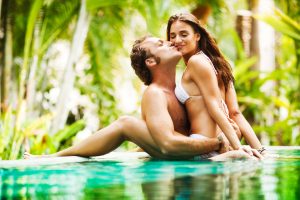 The suggestion is that for the perfect sex life a woman just needs to find the right man: usually a loving and considerate partner, who will, of course, know how to give her an orgasm.

Self-evidently a woman needs a considerate lover if intercourse is to be a love-making act otherwise it is simply rape. A loving partner may cause a woman to be AMENABLE to intercourse but women cannot ORGASM from loving emotions any more than men can.

Orgasm involves a release of sexual emotions (through an appreciation of eroticism and explicitly sexual concepts) not romantic emotions. Romance may be an excellent lead in to sex but it cannot cause orgasm even in women.

Minor details are glossed over: such as the FACT that since the vagina, as part of the birth canal, has few nerve endings women typically are aware of little sensation from penile thrusting. Equally no one worries about the FACT that most women need direct clitoral stimulation for orgasm and the clitoris is only stimulated indirectly during vaginal intercourse.

Never mind. A man’s fantasy of providing female sexual pleasure remains intact. Through intercourse a man can enjoy his partner’s breasts and mouth while stimulating his penis.

Men are not alone in misunderstanding female sexuality. Dismissing Shere Hite’s detailed conclusions about how women learn to orgasm, one woman said “Now we’re being told how we should orgasm, holy shi-! It’s much easier than the babble of a therapist: find a man who KNOWS WHAT HE IS DOING!”

Sometimes people imply that an experienced male lover knows how to use positions and techniques for sexual intercourse. They are obviously unaware that, no matter how inventive the position, the experts concluded in the 1970s that the INDIRECT stimulation of the clitoris during intercourse is insufficient to allow most women to orgasm.

A man can provide the additional DIRECT clitoral stimulation that a woman needs for orgasm by hand or mouth. Anyone who has tried this will know that such techniques do not guarantee orgasm for every woman. It may be better if the woman provides her own clitoral stimulation during sex and many experts suggest this as if it will GUARANTEE an orgasm.

If a woman cannot give herself an orgasm then it is unlikely that someone else will be able to. Sexual arousal originates in the brain and no man, whatever physical stimulation techniques he uses, can control what happens inside a woman’s head.

Many women assume that female orgasm arises from softer (sexually implicit) images of love and romance rather than from the cruder (sexually explicit) images that lead to male orgasm. Shere Hite referred to women’s experience of heightened arousal as ’emotional orgasms’ to differentiate them from real female orgasms. Perhaps the term ‘emotional orgasm’ is unhelpful. Another way to differentiate between women’s experience of orgasm is to ask about the impact of the relationship.

“In some cases, it was not even clear to the woman herself whether there had been an orgasm or merely high levels of arousal.” (p199 The Hite Report 1976)