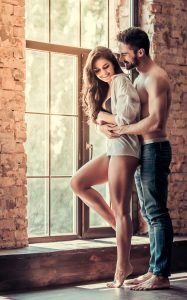 The web shows just what an extraordinary level of interest there is (both from men and women) in suggestions for how a woman can orgasm during sex.

Just to give a flavour, here are a few tips from the experts:

Shere Hite explained in ‘The Hite Report’ (1976): some women obtain the DIRECT clitoral stimulation they need for orgasm by stimulating their clitoris by hand during sex with a partner while other women find a position for intercourse that maximises the INDIRECT clitoral stimulation from male thrusting. Although this second approach is ideologically appealing, orgasm is likely to be more difficult to achieve with indirect genital stimulation – imagine men settling for a partner thumping against their groin!

The huge omission from The Hite Report (and other sex books) is that there is no acknowledgement of the psychological aspects of sex. No one explains how women become sexually aroused enough for clitoral stimulation to lead to orgasm.

Women use orgasm techniques (just as men do)

Many women (even those advising others) are uncomfortable with eroticism and explicit sexual behaviours. So although men know that their PSYCHOLOGICAL sexual arousal depends on an appreciation of eroticism (images of the body of a real or imagined sexual partner), women are often advised that female sexual arousal arises simply from love and romance.

Women are not even told that clitoral stimulation is needed for female orgasm. Women would need to be MORE SEXUAL than men if they could orgasm during sex without making use of (physical and psychological) orgasm techniques as men do.

It is quite possible that there are differences between male and female sexuality relating to levels of sex drive, ease of arousal and the importance of orgasm. Nevertheless enjoying our sexuality through sexual arousal and orgasm involves:

Other sites promise ‘mind-blowing’ orgasms. Ways Women Orgasm takes a more pragmatic approach and offers the chance to compare notes on how to make female orgasm more likely through an appreciation of the facts of female sexuality.