Male nudity does not cause female sexual arousal 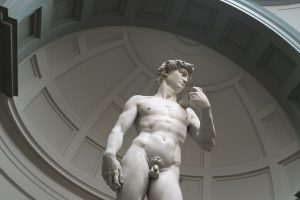 The naked male body can be a beautiful sight and yet our heterosexual society is dominated by images of women’s bodies. The ancient Greeks were more relaxed about homosexuality and statues indicate their appreciation of the sensual male nude.

Gay men certainly appreciate the naked male, including male genitals but women are often offended by nudity, especially genitals, and so nudity is censored in our society.

Andrew Stanway’s film ‘The Lover’s Guide’ (1991) was a break-through in British censorship of films for general release. He was allowed to show the erect penis for the first time but only because his films were intended for educational purposes.

The film ‘The Wedding Date’ (2005) includes a scene where Dermot Mulroney is relaxed about appearing naked in front of a woman (as if!). The woman’s horrified reaction to a man’s genitals not only indicates how female sexuality differs to male sexuality but also provides a clue as to why women’s sexual arousal is much more elusive with a partner.

Men have more to lose by appearing naked because an erection betrays their intimate thoughts. Men don’t want to expose themselves for fear of being sized up or becoming aroused under scrutiny. ‘The Full Monty’ (1997) indicates men’s insecurities over nudity.

Men’s sexual arousal arises from looking at images of the naked body of a sexual partner, which explains the daily sales of pornographic magazines.

Regardless of these claims, there are few pornographic magazines for heterosexual women. ‘Playgirl’ is an exception but presumably has another audience. Even the UK magazine ‘Scarlet’ marketed for sexual women, avoids images of couples engaged in explicit sexual activity.

… there seems no doubt that these reactions largely depend upon the fact that most females are not psychologically stimulated, as males are, by objects which are associated with sex.

… only a small percentage of homosexual females is ever aroused erotically by seeing the genitalia of other females.” (p655-6 ‘Sexual behavior in the human female’ by Alfred Kinsey published 1953)

My own nakedness has never bothered me but men’s interest in women’s bodies teaches us to become self-conscious. Women’s bodies are constantly being scrutinised not only by men but also by women. Any woman with a less than perfect body is ridiculed because the assumption is that a woman only displays her body in public to attract male attention.

‘The Calendar Girls’ (2003) tells the story of a group of middle-aged women who posed naked, but tastefully, for a calendar. It caused uproar because they were not young women with flawless bodies but women who had given birth or grown old.

Nudity causes men to think about sex even more than usual and they mistakenly assume that women have the same sexual motivations. While I was sunbathing on a nudist beach, one woman bent over to get sun cream out of her bag and my partner suggested that she must have done so deliberately so that the men on the beach could enjoy looking at her genitals.

The fact is that she was much more likely to be just getting sun cream out of her bag! That comment made me aware of needing to keep my legs firmly together on the beach. I have been most relaxed when on a gay nudist beach in Mikonos, Greece because I didn’t have to worry that anyone might assume that I was sunbathing nude as a means of making a sexual invitation.