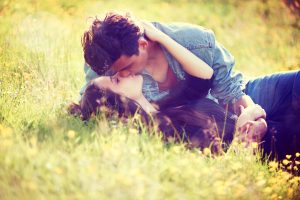 A BBC documentary ‘The Human Body’ presented by Dr Robert Winston films a sex education class. First the teacher writes the word ‘SEX’ in large letters on the blackboard and then asks the teenagers to suggest other words associated with sex.

After the standard contributions the teacher adds the word missing from the list: ‘LOVE’.

Despite contraception, sex still involves a risk of pregnancy, sexual disease and much emotional turmoil(!). So we promote the link between sex and love to ensure that young people understand the responsibilities associated with a sexual relationship.

An English girl of sixteen came out to the South of France one summer. On her first night she met an Australian whose self-confessed ambition was to lay every woman in the resort. She fell for his chat and his blond good looks and lost her virginity. The next day he moved on (mission accomplished so to speak) and naturally she was devastated.

“Male promiscuity often depends upon the satisfactions that may be secured from the pursuit and successful attainment of a new partner. … Once having demonstrated their capacities to effect sexual relations with the particular individual, they prefer to turn to the pursuit of the next partner.” (p683 Sexual behavior in the human female 1953)

Courtship involves a man showing his willingness to engage on the loving aspects of relationships in return for sex. So any woman hoping for more than a ‘one night stand’ should make a man wait (at least a date or two) for sex. It won’t do him any lasting harm.

Since a woman does not get the same easy pleasure from sex, she offers a man short-term pleasure in the hope of longer-term companionship and support (including family).

This highlights another difficulty in assessing women’s sexual desire (and their ability to enjoy sexual arousal). Young women often make the mistake of assuming that a man will love them if they offer him sex. You can follow their logic but it doesn’t work like that.

A man is more likely to marry a woman who is sexually choosy than one who is sexually easy. Not only can he be more certain that a child is his but also her willingness to have sex only with him is a compliment because it singles him out as a mate.

Sex and love are different

In the long run, most of us find that having sex with someone we know and love adds something special to the experience. But that does not mean that sex and love are the same thing. SEX is raunchy, exhilarating, orgasmic and fun. LOVE is caring and nurturing. The two can go together or side-by-side but they are different.

It’s not just women who are unwilling to acknowledge difficulties with female orgasm during sex. It’s much easier to assume female sexual arousal or overlook it than to face it because there are no easy solutions. Why admit a problem you can’t solve?