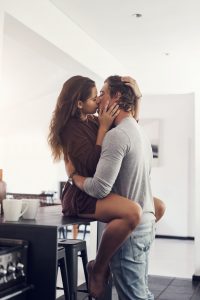 In pursuit of knowledge and understanding of sexual arousal, I went to a large newsagent in London’s Oxford Street to review the covers of fifty or more pornographic magazines lined up on the top shelf. Over 90% were directed towards heterosexual men. Most of the remainder was male homosexual pornography. The few pornographic magazines for women were for lesbians.

Although pornography is labelled ‘adult’ as if this is a unisex indulgence, the truth is that the vast majority of women never engage on the subject. Censorship protects not only minors but also the many adult women who are disgusted and offended by men’s enjoyment of the physical.

Officially, human sexuality is always presented in terms of a relationship. This allows male and female sexuality to be viewed purely through social liaisons and reproduction. Little importance is placed on the massive sex industry because of the taboo over men paying women for sex.

“After thinking about sex every six seconds for six days, men are beginning to need to do something about it.” (p15 The Bluffer’s Guide to Men 1998)

Perhaps it is worth stating the obvious that men do not reach orgasm simply through looking at images of the female form. In their minds, they also need to contemplate what they would like to be doing with a sexual partner.

Men have a much easier time, than women typically do, of transferring orgasm techniques to sex. On the physical side, the vagina may not grip the penis as firmly as a hand but the penis is still directly stimulated. Equally men’s sexual fantasies map fairly easily onto a real life sexual encounter. Instead of looking at pictures of naked women, a man now has the real thing in front of him.

Initially, the turn-on of a new sexual partner is enough for a man to reach orgasm without any further assistance. However, over time men also use sexual fantasies to help them through more routine sex by visualising more adventurous sexual episodes.

“ … people who report most guilt about having fantasies during intercourse have higher levels of sexual dissatisfaction and dysfunction than those who are relatively guilt-free.” (p417 Human Sexuality (fifth edition) 1995)

Since a woman is not biologically driven to reach orgasm, she approaches sex appreciating how her body causes a man to become sexually aroused. A woman enjoys her own sexual arousal by focusing on fantasies that revolve around imagining a man’s desire to enjoy her body sexually and to penetrate her (take her). Women’s sexual psychology is naturally tuned into being on the receiving (as opposed to initiating) end of sex. So women get turned on by the idea of things being done to them.