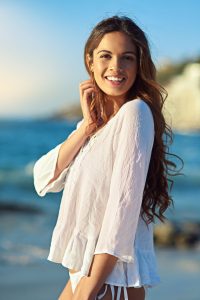 Published in 1972, ‘Joy of Sex’ by Alex Comfort MD was revolutionary at the time because it suggested a new openness and a sense of fun in modern sexual relationships. Liberal-minded couples welcomed the idea that it could now be considered normal and ‘uninhibited’ to enjoy sex as a natural part of an adult relationship.

Drawings, as opposed to photographs, portrayed the physical intimacy between two lovers sensitively. This tasteful presentation of a couple’s sex life avoided any potential concerns that the book might be pornographic in nature, making it attractive to women in particular.

In fact, Alex Comfort never ran a sex therapy practice and so he was not presenting a heavily researched view of sex. He was offering suggestions, based on his own sex life (with his much younger mistress – not his wife), for how other couples might bring some variety to sex. ‘Joy of Sex’ documents a man’s appreciation of eroticism and the activities that he found pleasurable.

The book is not explicit about the woman’s arousal and my mistake was to assume that the relationship illustrated was based on equality between the sexes. I assumed – wrongly as it happens – that other women would also be looking for a sexual (rather than an emotional) payback from their sexual relationships involving similar levels of sexual pleasure that men enjoy.

A woman can have sex for years without ever experiencing sexual arousal or orgasm. This explains why the average age to come out is 17 years old for gay men but 40 years old for gay women. Of course, a woman’s sexual fantasies might cause her to suspect she is lesbian earlier than this. But a lesbian woman can marry and have children just as a heterosexual woman does because female orgasm is not required for her either to participate in a sexual relationship or for reproduction.

Sexual relationships are not based on equal sexual pleasure

The fact that women are much slower to arouse may be acknowledged but it is rarely explained why this should be or what the consequences might be for a sexual relationship. Any difficulties with female orgasm are often dismissed as insignificant.

“Frigidity – This does not mean failure to enjoy sex when one is dead with fatigue… Nor does it mean failure to get a mind-blowing orgasm on every single occasion. If it does mean these things, every woman is frigid. …” (p198 Joy of Sex 1972)

An older male doctor referred me to a family planning library in London that provided information about contraception and childbirth. Sexual pleasure is associated with the sex industry where women are either being exploited or are exploiting men for money. Since the sex industry is fuelled by men’s interest, not women’s, it is difficult to find un-biased sources of information about female sexuality.