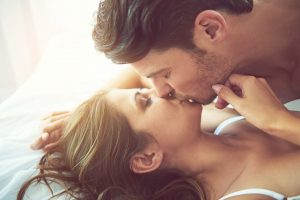 When I had sex for the first time, I was disappointed because I had hoped that sex would be spontaneously arousing enough for me to orgasm. I didn’t have any clear idea about what I would do during sex except perhaps to respond affectionately to my lover’s love-making.

It’s amazing when you think of it. I was eighteen years old and a virgin so my vagina was as tight as it was ever likely to be. Yet I couldn’t feel a thing from thrusting, not even when my partner’s penis initially penetrated me. I was waiting for something to happen and suddenly it was all over.

Even subsequent times I was none the wiser. Naturally, we experimented with oral sex as well as different positions and techniques for sexual intercourse but nothing worked. I was so far off feeling any sexual arousal that it was difficult to imagine what could possibly make a difference.

Despite talking to experts about my experiences, so far no one has been able to explain them at all. When I have told them that my boyfriend remarked that other virgins had made the same comment, the most usual reaction is silence. I am told that if I read so-and-so I would realise that my experience cannot be. They imply that no one else has the same experience.

Therapists conclude that since other women say nothing they must be happy with sex. There is little acknowledgement of just how embarrassed most people are about discussing their sexual experiences. I can vouch for the fact that even when a person is relatively relaxed about sex (as I have been) the humiliation of the implied sexual inadequacy is a very effective silencer.

So women learn to accept their sexual experiences for what they are. They make the best of it for the sake of their partner. Sex becomes an activity to be ‘gotten over with’. Sexual arousal is implied or faked depending on pressure from the man.

As a more experienced woman I now know that a woman plays along with men’s sexual fantasies, in part, to minimise her own effort in an activity that is not designed to provide women with an equal sexual pleasure. After all, it’s human nature…

Why spend half an hour when you only need to spend a couple of minutes? It’s not only prostitutes who know the value of time. It is much easier for a woman to play along with a man’s fantasies of arousing a woman so that he orgasms quickly.

In the British film ‘Saving Grace’ (2000) two women (wife and mistress) compare notes after years of sex with the same man. They don’t talk about the sexual pleasure they enjoyed, they giggle about how much noise he made when having his orgasm. Men never appreciate that a woman’s role in intercourse is often that of a spectator: simply waiting for the man to come.

If sex provides men and women with equal pleasure, why do women so often want to obtain a financial advantage from their sexual relationships with men? For women, sex is always a trade: either for MONEY or for LOVE (companionship, mutual support and possibly family) because women do not experience the same delirious pleasure from sex that men do.