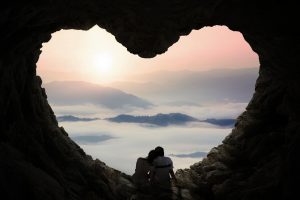 The Gräfenberg Spot, or G-Spot, has been surrounded by controversy ever since its ‘discovery’ only decades ago. Some women may have one about an inch or so (2-5cm) up in the front wall of the vagina.

The G-spot is believed to be an erogenous zone which when stimulated can lead to high levels of sexual arousal and powerful orgasms. Despite all the hype many couples struggle to find any evidence for its existence.

A recent (2010) study of 1,800 women in the Journal of Sexual Medicine has found no proof for it. The research team at King’s College, London suggest the G-spot may be a figment of women’s imagination, encouraged by magazines and sex therapists. So what does that leave us with?

There is also a difference in size of the genital organs. The male genitals – at least the parts we can see outside the body are much bigger. A man’s penis (when erect) must be a hundred times bigger than a woman’s clitoris…

Of course, inside is a different story. Both organs reach back into the pelvis and include muscles of the pelvic area of the body (basically in between the hips). When you are sexually aroused, the external organ becomes erect but also you have an erection of the muscles internal to the body (erectile tissue) that become engorged when a person is sexually aroused.

If you were to stimulate the person in this pelvic area when they are already engorged and physically aroused, this would stimulate their internal erection. For a man you have to stimulate his internal erection through the anus because there is no other opening. In fact, there is also a male G-spot, which is the prostate gland and accessible by penetrating a man anally. Some women do enjoy sharing physical intimacy with a partner but even so I wonder how many women explore that one…

The vagina is part of the birth canal and so it has very few nerve endings. A woman is unlikely to be able to feel a man’s penis inside her even if he is built like a horse.