A man’s sexual arousal can be very flattering 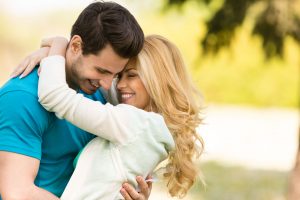 In the early days of a romance, a man feels loved and needed through sex. A man’s sexual admiration for a woman makes her feel cared for and appreciated.

Women’s key family role makes them more dependent on a supportive relationship. For women love-making tends to be less about orgasm and more about building long-term emotional bonds. So women’s sexuality is often defined in terms of:

In ‘The Mirror has two Faces’ (1996) Barbra Streisand and Jeff Bridges star as a couple who agree to marry but not have sex. On continued sexual rejection by her husband, the wife admits “I don’t do anything to you – that’s the problem.” She continues: “I believe in lust and sex and romance. I want someone to go crazy, out of his mind for me.”

“It cannot be emphasized too often that orgasm cannot be taken as the sole criterion for determining the degree of satisfaction which a female may derive from sexual activity. Considerable pleasure may be found in sexual arousal which does not proceed to the point of orgasm, and in the social aspects of a sexual relationship. Whether or not she herself reaches orgasm, many a female finds satisfaction in knowing that her husband or other sexual partner has enjoyed the contact, and in realizing that she has contributed to the male’s pleasure.” (p371 Sexual behavior in the human female 1953)

While men are valued as providers, women are valued for being attractive. A woman wants to be rushed off her feet with a man’s passion for her. A woman’s ability to turn her man on causes him to want her both sexually as well as to ‘love and to hold’. Sometimes female sexuality is defined in terms of women’s power to attract a man.

A woman can enjoy many aspects of her sexual relationship with a lover, such as sharing the sensual pleasures and emotional intimacies of sex, regardless of her own sexual arousal and orgasm.

Sex and love are often confused for women and, for many women, sex need not be about orgasm at all. ‘Titanic’ (1997) was one of the most popular films of all time because women love the idea that a man could be so totally devoted.

Rod Stewart’s song says it all: “You’re in my heart. You are my lover, you’re my best friend”. Emotionally, it’s possible that men need women more than women need men because men don’t share emotional intimacy with others as easily as women do. It is sex that binds a man to a woman and motivates him to fight to the death if necessary to protect her.

Like it or not, sexual relationships favour male orgasm and naturally, given their drive to reach orgasm, men hope a lover will enhance their sexual arousal. By being the appreciative female lover a woman shows that she cares about her partner.

A woman becomes less willing over time if she feels that he does not care about her priorities. Showing that you care about someone involves talking together and seeking an understanding of how the other person feels and what is important to them.

“A man’s sense of self is defined through his ability to achieve results. ” (p16 Men are from Mars, Women are from Venus)

“A woman’s sense of self is defined through her feelings and the quality of her relationships. ” (p18 Men are from Mars, Women are from Venus)