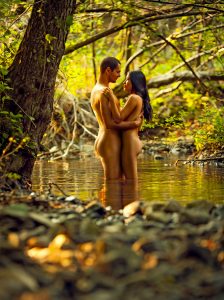 Our ability to become sexually aroused through an appreciation of eroticism is a normal as well as a necessary part of human sexuality. Sex (male arousal and orgasm in particular) leads to family and yet hypocritically, while family is encouraged, sex remains taboo.

“Unlike a boy’s very obvious penis, which he knows is pleasurable to touch and fondle, a girl’s genitals are hidden, mysterious, remote.
I find it remarkable (and disturbing) that many women have never used a mirror to see what their genitals look like and to find out where their clitoris is.” (p106 EveryMan 1980)

From puberty onwards, boys are fascinated by their penis: the way it grows and is pleasurable to touch. They learn that their appreciation of the sexual attributes of women or men (depending on sexual orientation) takes them from arousal to orgasm.

More than this, women’s minds are simply not wired to appreciate the physical aspects of sex. This is why many women (even those who work in the sex industry) think men are ‘like animals’. Men seem to revel in all the things that women find unappealing: the hairy skin and the musky smells associated with the genitals as well as the bodily fluids that accompany sexual activity.

Many women never learn to appreciate the eroticism that leads to sexual arousal so they never explore their sexual fantasies. Without the experience of true sexual arousal, they never understand why anyone would ever want to stimulate their genitals.

Men do not see sex purely in terms of family or ‘making love’. Men also want to enjoy sexual pleasure with a partner. If there was more education for women to help them understand men’s appreciation of eroticism, perhaps more women would be willing to explore sexual activity with a partner and then fewer men would be looking for sex with a prostitute.