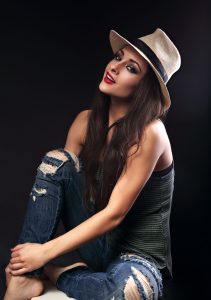 Shere Hite explained how women apply orgasm techniques in order to orgasm during intercourse. Women’s sexual arousal and orgasm are not automatic and so women have to learn how to orgasm. Inevitably, such techniques take time to develop.

“… the two reasons women don’t orgasm during intercourse are:

(1) they are given false information, specifically they are told that the penis thrusting in the vagina will cause orgasm; and

(2) they are intimidated from exploring and touching their bodies… They do not control their own stimulation.” (p53 The Hite Reports 1993)

Unfortunately, female orgasm is not required for reproduction and so vaginal intercourse is not designed, either physically or psychologically, to provide a woman with orgasm. Luckily other sexual activities can be just as enjoyable as (if not more than) intercourse.

Intercourse naturally allows a man to control his own physical stimulation (of the penis) through thrusting. Even if the woman takes the initiative and ‘rides’ her man from on top, she is still stimulating his penis with her vagina. A couple needs to build into their sex life the same freedom for the woman to obtain the clitoral stimulation that she needs.

Clitoral stimulation is not everything

“Forget the missionary position. Most men think that if they stick it in you you’ll be screaming with orgasm, just as long as they keep at it enough” says Ruth, 30. “It’s just not so. No matter how much you pump, nothing is going to happen, apart from her writing a mental shopping list for Tesco. Unless, of course the clitoris is involved. And that’s physically impossible if you’re lying on top.” (Men’s Health magazine Jan/Feb 1998)

Over time a man can learn how to stimulate his partner but this kind of sensitive technique is difficult to acquire as a man relies on his partner’s feedback. The likely areas, equivalent to the erogenous areas in a man, include the labia themselves (the length of the penis), either side of the labia (the testicles), the entrance to the vagina (base of the penis) and around the anus.

A much gentler approach is to be recommended in real life, at least to start with. A man needs to learn how his partner reacts when stimulation is pleasurable. Signs of sexual arousal in a woman are subtler than for a man but include the degree and consistency of her vaginal fluids, the extent that the vaginal entrance and labia are swollen and the degree of clitoral erection.