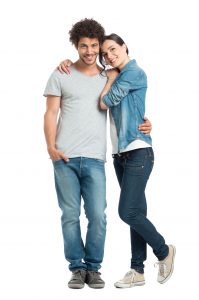 Younger women are often seen to be more sexual simply because, until they find their mate, they have more incentive to be popular with men.

Dating includes sex as part of a ‘wine and dine’ package fuelled on both sides by sexual ego. Sex is fun because of the chase and the novelty of an unfamiliar lover. So, single women often struggle to understand the challenges of a live-in relationship spanning decades where sex can easily become quite mundane.

Women who have been married for decades know that it is women who make relationships work over the longer term. When men buy women flowers etc. they are implicitly acknowledging this special effort that women make in relationships.

After the initial romantic glow any woman, to varying degrees, engages in a sexual relationship for her partner’s benefit, especially once any appearance of ‘love-making’ is lost. Unfortunately, the experience of the majority is overruled by the more sensational. So the idea that every woman is a secret nymphomaniac remains the popular view even though it contradicts most people’s real life experiences of sex.

Sex is important to men regardless of any relationship

Physical intimacy is so important to men that relationships with women often do not make sense without sex. A man’s sex drive has little to do with a relationship and this dis-connect leads a woman to conclude that his ardour is impersonal.

Hannah (late forties, children, relationship 25 years) told me of a friendship she had had with a man when she was younger. She enjoyed talking with him. After they had known each other a while he suggested that they have sex. He claimed that it was not a big deal to change their friendship into a sexual relationship. However, Hannah said that she did not think of him in that way. The man concluded that if they were not going to have sex then there was no point continuing the relationship.

“Men will do anything for sex, and will behave quite out of character to achieve it, such as spending several hours being romantic, and paying attention to what a woman says.” (p15 Bluffer’s Guide to Men – 1998)

Hannah told me that she shared my experience of not being able to orgasm during sex. Nevertheless, after twenty five years with her partner she was still prepared to participate in sex on a regular basis (admittedly because he was paying the bills). Instead of appreciating her generosity, her partner had complained that she made no effort to ‘make sex exciting for him’.

Why does a man believe that a woman should do this for him? It is natural that men hope a lover will enhance their sexual arousal but they should consider what they can offer in return. Hannah’s partner refused to make any change. Men often want to know how to get laid: try putting your own orgasm to one side and investing some time in pleasuring your woman.

“Men often feel very angry with women who never initiate sex and too often don’t want sex. But this anger has a tone of alienation, guilt, and insecurity: men feel instinctively on some level that sex does not involve an equal sharing, especially when they are having an orgasm and the woman does not – and this puts them on the defensive.” (p220 The Hite Reports 1993)

If a man wants to enjoy sex for life then, he needs to find ways to make the experience more balanced in her favour. You only achieve a good sex life over the longer-term by investing in your sex life. Hannah admitted that, even if she did not have an orgasm, an occasional sensual massage would be a significant improvement on their intercourse-to-male-orgasm sex life.

“Your partner’s not there to service you, it’s not their job to keep you sexually satisfied. You’re together because you love each other and want to make each other happy. Constantly hassling them for sex does the opposite.” (p228 Hot Relationships 1999)