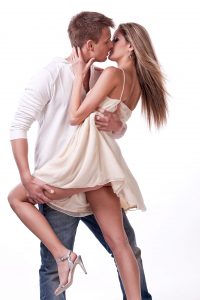 Foreplay has evolved as a means of compensating women for the lack of clitoral stimulation during intercourse. The concept behind foreplay techniques (including clitoral stimulation) is that a man should be able to arouse a woman sufficiently to enable him to continue stimulating her to orgasm through thrusting alone.

One problem with foreplay is that clitoral stimulation needs to continue to the point of orgasm. (Imagine if a woman discontinued penile stimulation just as a man heads for his orgasm!)

Foreplay existed well before the role of the clitoris was understood. Male love-making naturally includes manipulation of a woman’s breasts and crotch to increase the male arousal needed for intercourse.

More fundamentally though, foreplay techniques do not necessarily assist with women’s arousal because sexual arousal depends more on a person’s psychological state than on physical stimulation.

The same pattern does not tend to work for most women. Firstly, women do not have the spontaneous sexual arousal men tend to have from the start and secondly, women do not find the naked body of a sexual partner as arousing as men tend to.

As a result of these two points, a woman is not turned on enough in her mind to respond to physical stimulation in the same way that a man does. This means that it is quite normal for a woman to experience a lack of arousal during sex. Many women don’t know how their own arousal works so small wonder that men struggle to find techniques to arouse their woman.

Women’s sexual arousal is not automatic

It is a sexual fact: women do not enjoy the same easy and spontaneous sexual arousal and orgasm that men do. The misconception that intercourse is as easily pleasurable for women as it is for men, leads many men to hope for a long-term sex life without accepting the need to offer their partner other compensations such as more sensual pleasuring.

“The naked truth is that women are more likely to be attracted to a man when he has his clothes on.” (p28 The Bluffer’s guide to Women 1998)

Men have an automatic response to the sex hormone testosterone (e.g. a younger man’s early morning erection) as well as becoming aroused by seeing or touching an attractive woman. Women do not experience the same kind of spontaneous sexual arousal. Women’s sexual arousal and orgasm are not automatic.