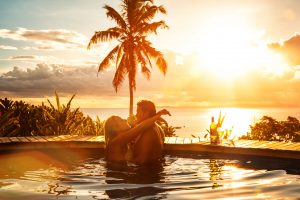 Real female orgasms involve the release of sexual emotions not romantic feelings. So it does not matter how much you love your partner, orgasm will not materialise out of thin air.

Orgasm requires at least a few naughty thoughts from time to time, so if your conscience is as clear as a nun’s then you can forget about ever having one.

“Few of us reach orgasm without fantasy, so let your imagination go wild! … Don’t get hung up about your fantasy; it doesn’t mean you’re odd, gay or secretly want to be raped. Most women fantasise about things they wouldn’t dream of doing in real life – that’s why we call them fantasies.” (p13 Hot Sex 1998)

Some women’s sexual fantasies do not transfer to sex

Some women find that they are not able to use their sexual fantasies effectively during sex with a partner. It has been suggested that this is particularly true for complex and surreal fantasies (as they often are). The presence of another person interferes with the mental focus needed to generate sufficient arousal for orgasm.

Women also have to work harder than men to generate orgasm from a much lower base level of sexual arousal. Our sexual thoughts do not rise as readily from the subconscious to the conscious mind as men’s do. So we have to be more inventive about our sexual fantasies and their surreal nature can make them more difficult to relate to a sex life with a real life partner.

Equally the imagery of physical sex play does not assist with female arousal. To generate sufficient arousal to reach the heights of orgasm from fantasy alone, my brain really has to focus. Even a dripping tap or someone else’s presence is enough to destroy my mental absorption in a sexual fantasy. So there is no question of being able to fantasise effectively during sex.

“Roxanne, a forty-seven-year-old psychiatrist, explains also that ‘women probably fantasize more and harder than men, because the traditional idea of feminine behaviour is a burden to a woman during sex. …

Fantasy restores the balance. Add to that that women spend more time thinking up stories anyway, and read more fiction than men, and you’ve got a wild world in there … lewd extravagances that I’ll bet most men never come even close to imagining.’

By focusing on some aspect of sex that she finds particularly arousing, and by exaggerating it to the point of outrageousness, a woman increases her chances of climaxing.” (p179 Satisfaction Guaranteed 1996)