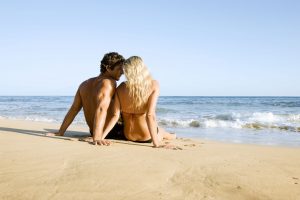 Imagine the scenario: a woman, wearing a skirt and no panties, climbs a ladder. A man below enjoys a clear view of her genitals. Imagine now that the genders are reversed: my point is that a woman is unlikely to appreciate the view in the same way that a man does.

Of course, someone will always disagree. A man said: “It depends from woman to woman, because if they want a quickie they like to take a look at your nakedness. “Drop your pants” was an order I got from a girlfriend once in Brisbane who was a Buddhist, when she saw the size of me she stripped and said ‘try to satisfy me – you are very big’ and I did. Second time I got that order was before I married in Tagbilaran. My now wife laid down and said: ”Let’s see how big you are – the bigger the better”, that was before we got married and she went mad for me.”

Men must think that women were born yesterday. Of course a sexually experienced woman appreciates the turn-on for a man if she emulates male sexual reactions. It is also a fact that many women fake orgasm.

“It is difficult for most males to comprehend that females are not aroused by seeing male genitalia. Some males never come to comprehend this.” (p657 Sexual behavior in the human female – 1953)

Women can enjoy many aspects of physical intimacy with a lover but we are not automatically aroused, the way men are, because our bodies are not full of the sex hormone, testosterone. Equally, we don’t get a hard-on (clitoral erection) by looking at male nudity: even the body and genitals of our partner. Otherwise women would pay for sex and the sight of the male body more than they do. No doubt there are women who pay for a male lap- or pole-dancer but, I think we all know, most would not.

Some people believe the sexual fantasy regardless of the evidence: “I must shake my head in wonder as to what women you have spent time with (or possibly they are VERY, very, young women who have not yet discovered their own sexuality). An older woman, say 30 to 55, is easily aroused. A well built man on a beach can absolutely stimulate a woman without her knowing him. Women are quite willing to ‘act like a whore’ in the bedroom and enjoy it, and as well they should, to the fullest.”

Women who take a pro-active sexual role are described as acting ‘like a whore’ precisely because not every woman behaves in this way. Few heterosexual men are paid for sex because men tend to be enthusiastic about sex whatever the circumstances.

Women are more concerned about commitment and trust than about orgasm. Presumably this is why is it so often suggested that women’s sexual arousal depends on her relationship with a lover or on the love-making skills of a particular lover.

Men have a much stronger sex drive than women so they want sex regardless of whether they are in a relationship. Men can enjoy sex with any attractive woman, even a prostitute. Also for many men, the only way they can enjoy the delights of oral sex, for example, is by paying because most wives and girlfriends are not willing to engage on such explicitly sexual activities.