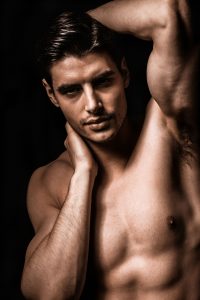 Alex Comfort’s book ‘The Joy of Sex’ (1972) documented primarily positions for intercourse that he and his mistress had found pleasurable as part of their affair. The affair was quite open and the two lovers shared the family home with his wife and son.

Don’t get me wrong. What Alex Comfort achieved was amazing at the time. His book brought eroticism into respectable marital sex and promoted the idea that a woman could hope to enjoy sexual pleasure with a lover.

One has to ask though. Why could a man pleasure his mistress and yet not (presumably) his wife? As a younger, more impressionable woman, was it possible that his mistress was impressed by more than his sexual ego?

The fact is that a successful sexual relationship is more often than not defined by the ease of the man’s sexual arousal, not the woman’s.

So naturally sex is easier for a younger woman. The woman’s role in sex is simply to accept her lover’s love-making. Equally male sexual success is viewed through the eyes of the beholder. A wife sees only the man. The mistress (younger woman) sees a sex god.

I hate to disillusion anyone, particularly when it comes to sexual fantasy. But is has to be said that if a sexual technique was infallible then it would work with every woman. The usual explanation for women who remain unmoved is that they are frigid.

The misconception that vaginal intercourse, or any physical stimulation technique for that matter, will lead to spontaneous female sexual arousal leads to women taking a passive stance in sex. They continue to hope indefinitely that a man, knowing how to reach his own orgasm, will somehow know how to make ‘a miracle’ happen for his woman too.

We all assume that a woman needs to do nothing during sex except wait for her man to deliver her sexual pleasure on a plate. Sadly we are handicapped by our faith in the sexual fantasy that male thrusting alone will eventually lead to female orgasm.

“… a woman’s sexual fulfilment is much more complex than a man’s. She requires a man with a skilful touch, lots of time, and a loving attitude. For a man, once he is aroused, it is generally a given that he will have an orgasm.” (p72 Mars & Venus in the Bedroom 1995)

You don’t say?! The trouble is that even though experts refer to women’s sexual dysfunction, no one has any answers for a lack of female orgasm during sex. I was left with a sense of hopelessness: the implication was that lack of orgasm was abnormal and yet there was no apparent solution. At the same time, it was also implied that I was expecting too much.

This is my main gripe with ‘Joy of Sex’ which is still published today without any acknowledgement (1) that intercourse is unlikely to be as easily orgasmic for women as it is for men and (2) that physical stimulation techniques of any kind are useless without accompanying psychological arousal. No sex manual ever talks about how women get turned on enough to orgasm.

The implication is that women can achieve the same levels of arousal from physical sex play that men do. And yet not only do women not approach sex already aroused as men tend to be but also their minds and bodies do not respond as men’s do.

For one, male nudity and the kind of physical sex play that men enjoy, do not cause a woman to become aroused enough for orgasm. So a woman needs to find a way to incorporate her fantasies into her sex life if she is ever to experience an orgasm.

Anyone, male or female, whether alone or with a partner, takes a state of mental arousal to orgasm through genital stimulation. So, firstly clitoral stimulation is needed for female orgasm but MUCH MORE IMPORTANTLY a woman needs to be mentally aroused enough for genital stimulation to be effective. Intercourse is key to reproduction but not to women’s sexual arousal.