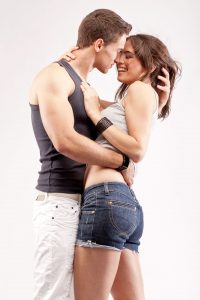 The website ‘Go Ask Alice!’ confirms that it is likely to be difficult for a woman to reach orgasm through intercourse since the clitoris is not located inside a woman’s vagina. They suggest that women should aim to have their orgasm during other sexual activity either before or after intercourse.

“a considerable portion of the sexual maladjustment in marriage arises from the fact that the average female is aroused sexually less often than the average male, and that she frequently has difficulty in reaching orgasm in her marital coitus.” (p172 Sexual behavior in the human female 1953)

Sex with a partner can quite legitimately include activities other than vaginal intercourse but ultimately most of us end up with a pattern for sex that includes intercourse or penetrative sex at some point. This may simply be because Nature intended that men should get the best possible sexual satisfaction from orgasm achieved by thrusting during penetrative sex.

“One thing that all words about sex have in common, the four-letter words, medical words and euphemisms, is that they include the idea of penetration of a vagina by a penis. You haven’t really “made love” unless this has happened.” (p36 Woman’s Experience of Sex – 1983).

Either way whether she is familiar with orgasm or not, in the absence of her own sexual arousal, a woman approaches her sexual relationship with a man through emotional (loving and romantic) feelings rather than sexual. Romance does not help with female orgasm but it may cause a woman to be more amenable to sex by accepting her partner’s love-making.

What amazes me is that everyone understands immediately if a man has even temporary difficulties with arousal but my dilemma meets with incomprehension. Why are you bothered about female orgasm when other women appear content? Sex is an unbelievably embarrassing topic and given the defensiveness and lack of sympathy I have met with I can understand why.