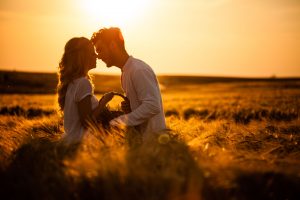 Sex does not stand alone in a relationship and in long-term sexual relationships couples need to invest in quality time together.

The candle-lit dinners, soft music and flowers we tend to associate with romance provide the backdrop for the companionable aspects of a relationship. Emotional intimacy comes from spending intimate time together by sharing conversation, humour and friendship over dinner, while taking a walk or as you prepare a meal together.

Men may have sex constantly on the brain but a woman’s mind does not tend to dwell on her genitals (or anyone else’s!) during the course of a normal day. So women’s sexual arousal is not automatic in the way that men’s tends to be especially during sex with a partner.

How to get laid: you need to lead up to sex by creating an environment that will lead to emotional and physical intimacy and hopefully sex.

Men are not a sexual commodity in the way that women can be to men. So, for example, we don’t refer to men as blondes or brunettes. We want a friend, a companion and, yes, a lover but someone who is interested in us as a person as much as a body. Women don’t stand in line to see a man’s genitals.

Sexual relationships favour male orgasm and yet men can be reluctant to invest effort in pleasuring a woman. A woman is initially flattered when a man gets turned on by her body but over time she doubts that he is devoted to her personally because his sexual frustration is so apparent. A difficult one for men but… try not to be too obvious about your own need for orgasm.

“A woman… wants more intimacy, comprising affection, commitment, and respect for individual identity… Although she knows he wants sex, she is frustrated because this seems to be the only form of intimacy he is interested in with her.” (p77 Why Men don’t get enough Sex and Women don’t get enough Love 1994)

Men approach sex with a genital focus because they are already aroused so they often fail to engage on the sensual aspects of sex. Since female orgasm is difficult to achieve with a partner, women are more likely to be looking to enjoy their own arousal through general pleasuring and non-genitally focused activities. A woman hopes that a man will show his gratitude by engaging on the more companionable and supportive aspects of the relationship.

In essence, women want to feel appreciated in a wider sense than just as a sexual partner. A woman is much more likely to be willing to pleasure her man when she feels good about the relationship in general. In the longer term, a man will also need to return the favour by ensuring that the woman receives some pampering by including a more sensual massage.

Over time sex all too easily falls into the marital rut of intercourse to male orgasm. If men want women to be more amenable to sex, then they should take the emphasis off orgasm (both their own and hers) and spend more time on sensual sex play, including touching and kissing. Also try to have some fun sometimes by introducing a new sex toy or sensation.