How to get laid 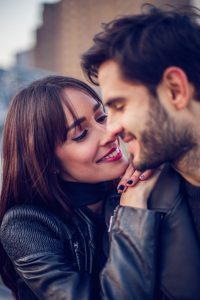 Men should take comfort from the facts of female sexuality. Most women are unlikely to orgasm from intercourse alone (which provides insufficient clitoral stimulation for orgasm) and yet amazingly few women ask about lack of orgasm.

In addition to the obvious personal embarrassment, likely explanations include:

In the film ‘Erin Brockovich’ (2000) Aaron Eckhart plays the free-spirited boyfriend. Despite the cool image (tattoos and Harley Davidson), most men probably disrespect Eckhart’s role because he offers to look after the children of the independent and career-focused Julia Roberts. In fact, Eckhart is incredibly sexy in this role and many women would love to go to bed with a man who exudes such charm, affection and emotional warmth.

Regardless of her sexual expectations, any woman is more likely to offer sex when she feels good about the relationship and loving towards her partner. Romance (affectionate and companionable time spent together) can lead a woman to be more amenable to sex.

However, these stimuli are very different to those she needs to reach orgasm (sexual fantasies involve explicit eroticism). Sadly, Nature has no need to care about female orgasm. As long as a woman is amenable to having sex, the job is done!

The film ‘Overboard’ (1987) stars Goldie Hawn and Kurt Russell. Goldie plays a spoilt millionairess who loses her memory and Kurt plays the carpenter, who purely out of revenge, pretends that she is married to him with his four children.

Sexual relationships favour male orgasm and it is clear that he would have little problem having sex with this woman he hardly knows and even dislikes. It is equally clear that she would consider it out of the question to have sex with a man she cannot remember knowing. In order to be amenable to sex, a woman needs to find a man sexually attractive. Women take longer than men to decide on this point because a woman is not looking for good looks alone but also for a man who is devoted to her.

Later in the story, they get to know each other and one evening, saying it is her birthday, they go on a date. After dancing, they talk and gaze at the evening sky while romantic music plays. They kiss and, on returning home, ‘make love’ for the first time.

“98 percent of the women… said they would like more verbal closeness with the men they love; they want the men in their lives to talk more about their own personal thoughts, feelings, plans and questions, and to ask them about theirs.” (p27 Women & Love 1987)

The woman now feels affection for the man and finds him physically attractive. Of course, he always was attractive but he suddenly appeals because she respects him and cares about him. Perhaps it is as self evident to women that relationships are about companionship as it is to men that they are about physical intimacy. In fact, both are part of a long-term relationship.