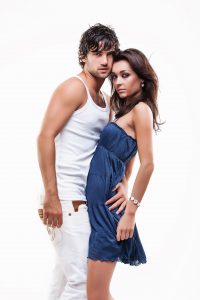 So in the movie ‘Swordfish’ (2001) Hugh Jackman hacks into the US Department of Defence, while threatened at gun point and seriously distracted by a hooker sucking him off. This scene simply would not work if the roles were reversed – quite apart from the fact that few top hackers are women!

“I only ever orgasm with a partner through oral sex and only if he’s really good at it. Lots of my girlfriends claim they come during intercourse but to be honest, I don’t believe them. I’m sexually educated and have a high, healthy libido and if I don’t have vaginal orgasms, I can’t see why they would.” (p102 Hot Sex 1998)

If only we could all apply such good common sense! We have very few channels for sharing our sexual experiences. Sometimes we assume that others must experience real life quite differently to ourselves even though there is no logical reason why they should. Just remember that bluffers, fakers and sex surveys do not provide reliable sex information.

“Read all the sex surveys you want but you still won’t really know what other people do in bed because what people say and what people do are two totally different things.” (p275 Hot Sex 1998)

When I have tried to talk to others about sex (not as a teenager but as a mature woman), I have been shocked by how defensive people can be. I am very happy for women who say they have orgasmic sex from day one.

Sexual ego is harmful if it prevents us from keeping an open mind and being willing to learn from our real life sexual experiences. As soon as I experienced a lack of arousal during sex with a partner, I suspected that descriptions of women’s ability to orgasm easily during sex must be fictitious. So why have women not stood up and said:

“But that’s ridiculous. My body and brain just do not react like that!”

One obvious reason is personal embarrassment. Another is that, although as heterosexual women our physical responses must be similar, our interpretation of those experiences can be quite different depending on our attitude and expectations.

Finally we are, often subconsciously, guilty of becoming defensive of our sexual fantasies and sexual egos. We cannot accept the facts even when they are laid out before us. The concept of ‘that’s just the way it is – take it or leave it’ does not appeal.

“Many males are disappointed after marriage to find that their wives are not responding regularly and are not as interested in having as frequent sexual contact as they, the males, would like to have; and a great many of the married females may be disappointed and seriously disturbed when they find that they are not responding in their coitus, and not enjoying sexual relations as they had anticipated they would.

…in view of the diverse pre-marital backgrounds of the spouses in the average marriage, it is not surprising that they sometimes find it difficult to adjust sexually. It is MORE surprising that so many married couples are EVER able to work out a satisfactory sexual arrangement.” (p520 Sexual behavior in the human female 1953)

Unfortunately, sex advice for women is often misleading because, for the most part, sex experts deal with sexual dysfunction and young people’s ignorance of the basic sexual facts. In fact, there is no intentional campaign to disseminate misinformation but simply a lack of understanding in an intensely personal area of our lives.