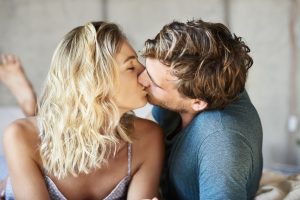 Young men wake up each morning with an erection and have spontaneous erections throughout the day as sex-related thoughts occur to them or simply as a result of seeing someone they find attractive. A boy has no choice but to learn about his sexual arousal and orgasm but, for women, learning how to orgasm is a much more conscious process.

“What’s pink and hard first thing in the morning? Answer: The Financial Times!” (The FT is a high-brow UK newspaper printed on pink paper).

Her man’s erection is a novelty in a woman’s first sexual relationship since her own anatomy provides her with no comparable experience. If a woman has an erection (of the clitoris) at all, it is only once she has the experience to know how to become highly aroused. A man’s sexual arousal can be very flattering and in the early days, a man’s devotion is reward enough.

I remember that I was fascinated by the way my partner’s penis appeared to have a separate identity of its own in our sex life! Whole books have been written about the personality of the penis, the cocky blighter, with or without his hat on. But the clitoris? The clitoris is like a demure flower that hides in the face of an audience like a blushing virgin.

“There are two types of penis. One expands and lengthens when becoming erect (The Grower). The other appears big most of the time but doesn’t get much bigger (The Shower). A Men’s Health survey shows 79% of men have growers 21% have showers.” (p34 Men’s Health Magazine June 2007)

In her book ‘Hot Relationships’ (1999) Tracey Cox tells how one lover was so engrossed in his book that, despite sucking him off, she failed to gain his attention. This scenario is so far removed from my experience of physical intimacy with men that I have to wonder whether she was in bed with a shop dummy.

Male sex drive represents a big part of how we define masculinity yet, due to embarrassment over sex, differences in sex drives are rarely admitted. Apparently there are even couples who never notice a difference. Not every man has a strong sex drive but equally not every woman is willing to acknowledge her partner’s sexual needs.

Men approach sex eagerly anticipating the easy pleasures of physical intimacy. They often fail to appreciate that for a woman to want to demonstrate her love for a partner through sex she must feel that she has been a receiver elsewhere in the relationship. Affectionate companionship (emotional intimacy) is just as important to women as sex (physical intimacy) is to men.