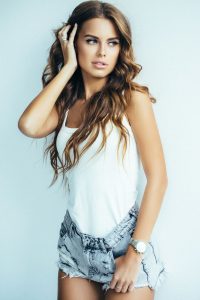 Caroline lived on a farm as a child and was fortunate in having innocent and light-hearted sexual experiences as she grew up. Even as kids they would play the ‘I’ll show you mine if you show me yours’ game on the bus ride to school.

Her mother insisted that Caroline went on the pill at sixteen. She was not bothered about the sex. She simply wanted Caroline to be protected from pregnancy. Caroline had her first serious relationship soon after. The sex was adventurous and great fun.

“The women who had orgasm during intercourse were usually those who, in a sense, did it themselves. They did not expect to ‘receive’ orgasm automatically from the thrusting of the partner.” (p51 The Hite Reports 1993)

Caroline travelled a great deal, working as a fashion model in Europe, the US and South America among other places. In the space of a few years Caroline had many lovers (she mentioned the figure 80). Many of these were one-night-stands. She simply thought the whole thing was a laugh. As she remembered some of the more outrageous experiences, she giggled. I asked her whether she had been worried about sexual disease. Caroline admitted that she had taken stupid risks but she had been lucky.

It made me think of ‘Four Weddings and a Funeral’ (1994) when Andy MacDowell enumerates her lovers. Hugh Grant, who had thought of himself as a bit of a playboy, is quite outdone by the time she gets to 32 because he had had “nothing like that many” girlfriends. Andy MacDowell explains that she “grew up in the country – lots of rolling around in haystacks”.

Caroline had sex with men for the fun of it. It was not about orgasm; it was sexual ego. A man’s sexual arousal can be very flattering and Caroline liked the fact that they wanted to have sex with her. She felt that she was the one manipulating them. It seemed quite callous to me but then I have always been a bit square.

Plenty of men screw women with shallow intentions. I guess it makes sense that women do the same. Caroline thought it was sweet that I had only had three lovers. I was never really interested in the ego trip of casual sex. I had romantic notions of love and friendship. As far as sex was concerned, being my partner’s lover and pleasuring him was how I showed my love for him.

Caroline married at 23 and has been faithful to her husband. When I talked to her she was a mother of four in her late thirties. She admitted that sex had become more of a duty over time as her priorities changed to focus on the children.

Caroline was very fortunate. Other women may find that transferring orgasm techniques to sex is not so straightforward because their sexual fantasies are more suitable for use alone than with a partner. Many women have to learn to accept enjoying the sensual or emotional pleasures of physical intimacy with a partner rather than orgasm during sex.