Why do women not always appreciate displays of male sexuality? 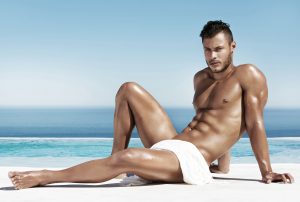 I have never seen any reason to be embarrassed about my body. I am pretty. I have sensual skin that browns easily and a sexy figure. My parents were always relaxed about nudity.

So when I was eighteen, out in the South of France for the summer, I enjoyed going top-less sunbathing. Why have those bikini lines that make your breasts look like icebergs? One day, as I was lying there on the popular pebble beach desperately trying to tan, I heard… “Just look at all those tits!” as a sailor’s voice carried across the water: the British Navy had arrived.

I looked out to sea and there was the naval ship. So I was less than surprised when half an hour later (they’re quick, those boys!) my sunlight was being blocked by a very pleasant young sailor. Of course, he wanted to know all about me. It was my afternoon off and, since he was only in port for a few hours, I didn’t see much point in getting to know him. We talked and he walked me back to my apartment. Sorry, nothing happened…

Some men like to display their male sexuality by aiming sexual remarks at women. That summer I was occasionally offended by men’s appreciation of my sexual attributes. “Hey, you with the big tits!” was once shouted at me from across the road. I can’t say that I’ve ever wanted to be singled out for my tits. It’s nice to have some but how to explain to a man…

It’s the way the man shouted for all to hear. It made me feel, not like a person, but like an object to be ogled at without any sensitivity and also with the implicit knowledge that I could not retaliate by shouting something similar back. How do you make a man feel like a piece of sexual meat? Female sexuality does not so naturally include such vocal displays of appreciation for the sexual attributes of the opposite sex. So it can be difficult to understand.

Imagine you had to wear your penis on your chest under your tee shirt, but essentially for the whole world to see. Would you appreciate comments from women about the merits of your sexual anatomy? Men may feel that it can never be insulting to be big. Well as a woman you can be both too small and too big. We are all sensitive about being identified as unusually different.

So when you think a woman is dying to be told how big her breasts are – give it some thought. Men perhaps feel that they would love to receive sexual heckling from women. Maybe. Just think how you would feel if a gay man made a sexual remark to you.

Well there’s a parallel here. Sexual remarks are great when you are the one dishing them out. Sexual compliments are only appreciated if you find the other person sexually attractive and women often take longer to decide on this point than men. Also women are not so often in the position of singling out the man they find attractive. Women’s sexual arousal is not driven by looking at naked images of men so we have less to gain from physical intimacy with the opposite sex.

For the most part, my experience is that male commentary is most often not intended to be offensive. I enjoy being whistled at by passing men and I always smile and wave back. Even quite recently, a passing French man made some remark I did not entirely understand – “Nice arse” or similar – and seemed surprised when I thanked him for the sexual compliment.

Once in informal company I used an impolite four-lettered word for a woman’s private parts. I was surprised that even in this day and age the women were shocked by the mention of such a word. Of course, the men said nothing. Although rarely admitted, censorship of nudity exists because most women positively dislike looking at anyone’s genitals up close (even their own).

I have always told my young daughters to use the word ‘pussy’ for their sexual anatomy, which I consider to be about as rude as the word ‘willie’. I was really quite angry when our young nanny told them to use the phrase ‘front-bottom’ instead. It would seem that women are offended by almost any explicit reference to their genitals regardless of who is making the comment.

By accepting intercourse, regardless of female orgasm, women never need to engage on other more explicitly sexual activities. It’s this aversion to the physical that gives men the impression that women are sexually inhibited. The facts are: female sexual arousal does not occur as easily as male but also women do not obtain the same rewards that men do from physical intimacy.