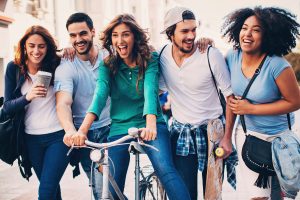 Renate, a student of twenty-six, liked to be affectionate with her male friends but then was bewildered when they interpreted her hugs as a sexual advance.

A man tends to assume that physical intimacy is a given as soon as a woman shows him any affection. A woman needs time to build the emotional intimacy that causes her to be amenable to sex.

This explains in part why women can happily kiss each other, touch and go to the bathroom together without any sexual implication. It is much more difficult for men to engage in the same kind of innocent intimacy with others of the same sex because men’s intentions when seeking physical intimacy are often sexually motivated.

One evening Renate invited some friends around for supper and after the others had left, one young man simply went upstairs and got into her bed. Renate did not know how to ask him to leave and so she had sex with him. After having sex with a number of her male friends, Renate found that even some of the men started to treat her disrespectfully.

We accept men being promiscuous because of their sex drive but women do not have the same excuse. This is why we can admire James Bond’s light-hearted sexual exploits but all three women in Charlie’s Angels are engaged in committed relationships. The truth is that most women are naturally more selective about who they have sex with.

“Among all peoples, everywhere in the world, it is understood that the male is more likely than the female to desire sexual relations with a variety of partners. … it seems probable that these characteristics depend upon the fact that the female is less often aroused, as the average male is aroused, by the idea of promiscuity.” (p682 Sexual behavior in the human female 1953)

Teenage girls should never feel bulldozed into sex by the popular view that sex is always easily pleasurable for women. True sexual liberation means girls having control over their own body and the confidence to hope to enjoy arousal from their sexual relationships. Most women who learn how to orgasm during sex do so only after many years with the same man.

In the ‘Fifth Element’, Bruce Willis kisses the alien beauty assuming that she is unconscious. Jumping up, she points a gun at him and gabbles unintelligibly. Later, he asks for a translation: “Not without my permission”. He smiles wryly, “I thought so”.

Whatever taunts are thrown out by men looking for a frivolous lay, in the longer term men respect a more picky woman. This is why many people believe in sheltering young women from eroticism because it is generally much more difficult for women to enjoy the same sexual pleasure that men do, especially from casual sex with an unfamiliar partner.

In fact, a sexually demanding partner can be a turn-off for a man. Simply put, men prefer to be the ones chasing women rather than the other way around. Nevertheless, a man is unlikely to see the contradiction in wanting his woman to be enthusiastic about sexual opportunities with him even when he knows that she is less driven by sex in general.