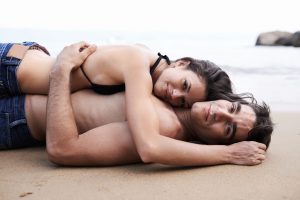 So it’s at least possible that women may experience sexual pleasure (including sexual desire, sexual arousal and orgasm) differently to men.

Men discover orgasm at a young age but women have no way of knowing what orgasm is or how to achieve it – either alone or with a partner.

It is difficult for men to appreciate that women do not have the same level of familiarity with their own sexual arousal and orgasm that men do. Women are certainly capable of orgasm but it does not happen spontaneously. Women have to learn how to orgasm.

“The average male is aroused in anticipation of a sexual relationship, and he usually comes to erection and is ready to proceed directly to orgasm as soon as or even before he makes any actual contact. The average female, on the contrary, is less often aroused by such anticipation, and sometimes she does not begin to respond until there has been a considerable amount of physical stimulation.” (p627 Sexual behavior in the human female 1953)

Unlike men, women rarely experience erections and even if they do, they are much less conscious of them. The clitoris may have millions of nerve endings but physical sex play does not lead to sexual arousal as easily as for men. So a woman can certainly enjoy passionate kissing but, even as a lead into sex, kissing does not cause a female genital erection (of the clitoris).

It’s important not to be judgmental about other people’s sexual experiences. But it can be misleading when we try to compare different women’s explanations for orgasm because we are not necessarily talking about the same thing. An orgasm, in the sense that men would probably understand the term, involves a release of sexual feelings not loving feelings.

Sadly the aversion that many women have to eroticism actually prevents younger women learning how to orgasm. Also given vaginal intercourse continues to be promoted as the only proper sexual activity, despite the fact that it provides insufficient clitoral stimulation for orgasm, means that women often never learn how they can enjoy true sexual arousal with a lover.

In case you doubt how common it is for women to have difficulty with orgasm during sex, just take a look at the thousands of articles on the web offering advice on this very topic! Of course, these articles always promise ‘easy orgasms’, ‘multiple orgasms’ or ‘mind-blowing orgasms’ just so couples don’t give up trying!

There is not even one article promising men easy orgasm because male orgasm is most usually a given.